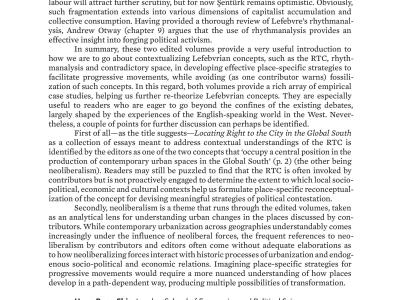 In his latest book Andy Merrifield does what he is the master at: briefly observ­ing the urban world and reflecting on it through the lenses of urban history and theory. He draws primarily on the urban theory of the usual suspects: Lefebvre, Harvey, Debord, Castells, Berman and Benjamin, along with some Althusser, Eric Hazan and Ray Pahl. It comes as no surprise, therefore, that Paris is the book’s major point of geographical reference (albeit augmented with a few exceptional examples drawn from the UK and the US).

In this fairly short book (12 chapters totalling 130 pages), several questions and claims are discussed. Merrifield’s 12 essays take us from Jacobins to Baron Haussmann, from debates on the nature of urban studies, cities and states in postwar Europe to film analysis of Detroit and austerity––together with some rebellions, Thatcher and The Invisible Committee. Merrifield explicitly claims that this is an optimistic work–– the question is whether it is up to the author or the reader to make such claims––but the book is nonetheless in constant tension between repression, surveillance and dispossession on the one side, and insurrection and revolution on the other. The title of the book begs the obvious question: what is the ‘new’? The title is a direct reference to Manuel Castells’ The Urban Question: A Marxist Approach (origi­n­ally published in French in 1972 and in English in 1977). Early on, Merrifield criticizes Castells’ take on the city as ‘collective consumption’, which he regards as an archaic urban question: ‘the stakes and arena of struggle have changed markedly since his day’ (p. xi). Castells’ The Urban Question is criticized for its passive rendering of the urban with a sole focus on reproduction. In the ‘new’ urban question, the urban is a place that capital plunders productively, where capital actively dispossesses budgets and land, and displaces people. But this cannot be the ‘new’ urban question, because (as Merrifield also shows) Harvey articulated a similar approach in 1973 (p. 20). It is not always crystal clear what the ‘new’––or ‘relatively new’ (p. 29)–– question is, but I think two concepts will guide us: neo-Haussmannization and its relation to planetary urbanism. The former is considered the ‘major component of the “new” urban question’ (p. ix), and suggests that what happened in mid-nineteenth-century Paris is now happening on a global scale, ‘orchestrated by transnational finan­cia and corporate elites everywhere, endorsed by national governments’ (p. x)––creating a new global orthodox that is both creating and tearing apart a new urban fabric.

Within this new urban fabric, old distinctions between global North and South, inner city and suburb, city and countryside, are ‘redundant, chaotic conceptions, requir­ing an upgrade and a rethink’ (p. x). This is related to the other concept that can guide us in finding the question (or perhaps this is actually the answer?), planetary urbanism. Now it is Haussmann and Paris all over, this time on a global scale. ‘Paris is a cell-form of a bigger urban tissuing’ (p. 29) and ‘Bonapartism’ projects its urban tradition onto planetary space.

This is important for something else that is new in the urban question–– follow­ing immanently from the above––the insurrection. Merrifield handles the legacy of urban studies with profound insight and elegance. In constrast, the arguments on the current urban condition are painted with a broad brush. This combination makes it a highly polemical read (as Merrifield has also stated himself more recently) and many discussions will surely follow this fascinating book. As The New Urban Question is a polemical work by a master in the field, I will end this review with a (friendly) critique.

On the insurrection, it remains unclear (to me at least) how this should or even could be played out. The rebellion is described just as broadly and vaguely as the world it is supposed to change. The revolutionary equivalent to planetary urbanism could arguably be some kind of socialist world revolution, but Merrifield is closer to ideas about local and urban rebellions and the Occupy movement––less in line with well-thought strategies and tactics, more in the tradition of Guy Debord. This is about indig­nados and Syntagma, not about Podemos and Syriza.

We agree that the world is constantly changing, with capitalism and urbanism being global phenomena, and spreading and growing in various ways––these things we must investigate and they will at times require new perspectives and concepts. Neo-Haussmannization is an interesting concept in this respect, but it would be nice to see more arguments, particularly arguments that come from outside of urban theory. Who are the Neo-Haussmanns? What constitutes the political-economic background for Neo-Haussmannization, and is this really a planetary phenomenon and (how and why) does it play out differently in different places? And what are the differences and paral­ lels to similar concepts? Recently, the concept of planetary urbanism has been the subject of greater discussion. Richard Walker has, for example, criticized Brenner and Schmid in City (2015) by calling into question claims that everyone in rural India, China and Chad is ‘urbanized’.

Considering a postcolonial critique of Merrifield’s The New Urban Question, we could ask whether the combination of the history of Paris and the review of previous scholars who also wrote with a focus on Paris is really the best formula for making plane­tary claims? Furthermore, are these kinds of claims derived from interesting negotiations (dialectics) between theory and empirical works, or from the textbooks alone?

The ‘new urban question’ seems to be the combination of neo-Haussmannization (where space is considered a pure financial asset and land is about speculation) and planetary urbanism (which now constitutes our whole planet). But what, then, about the global industrial workforce which is still increasing (between 2004 and 2012 even increasing at a faster rate than the global service sector)? Where do these people live and what do they do? Or do we all (in theory) live in Paris? 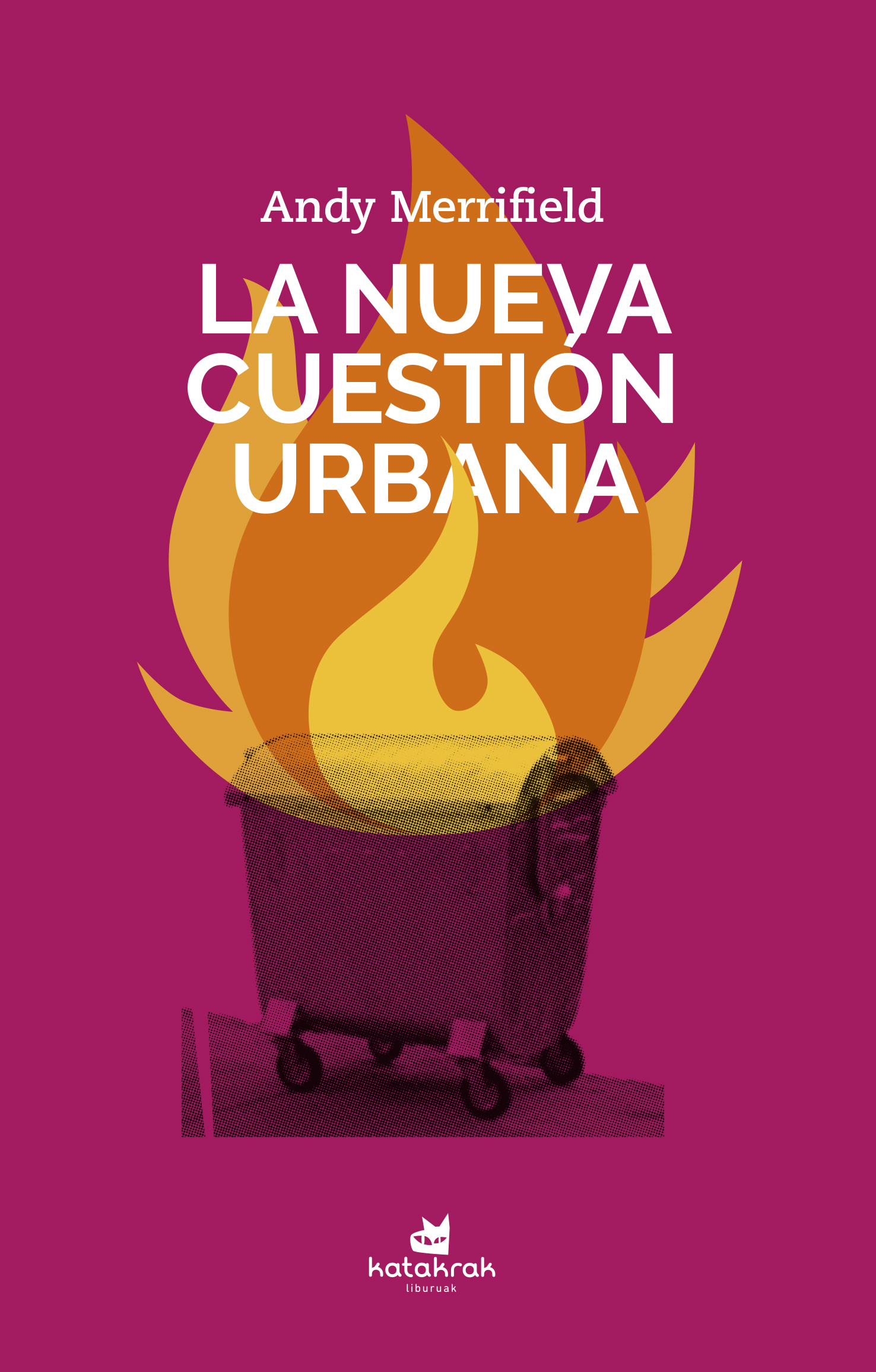 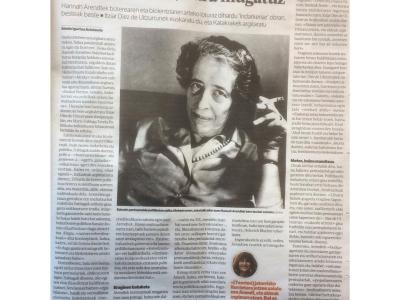 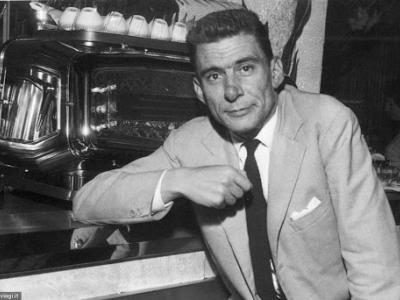 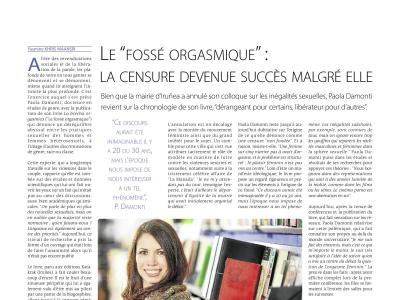